There are a few ways to use Git and Replit together, using either the GUI controls built into the Replit IDE or the Replit shell.

In the sidebar, navigate to the version control tab. If your repl isn't yet configured, this will prompt you to connect your repl with a new or existing repository on GitHub. From there, you can switch branches, pull in new changes, or commit and push any changes you've made in the repl back up to GitHub. 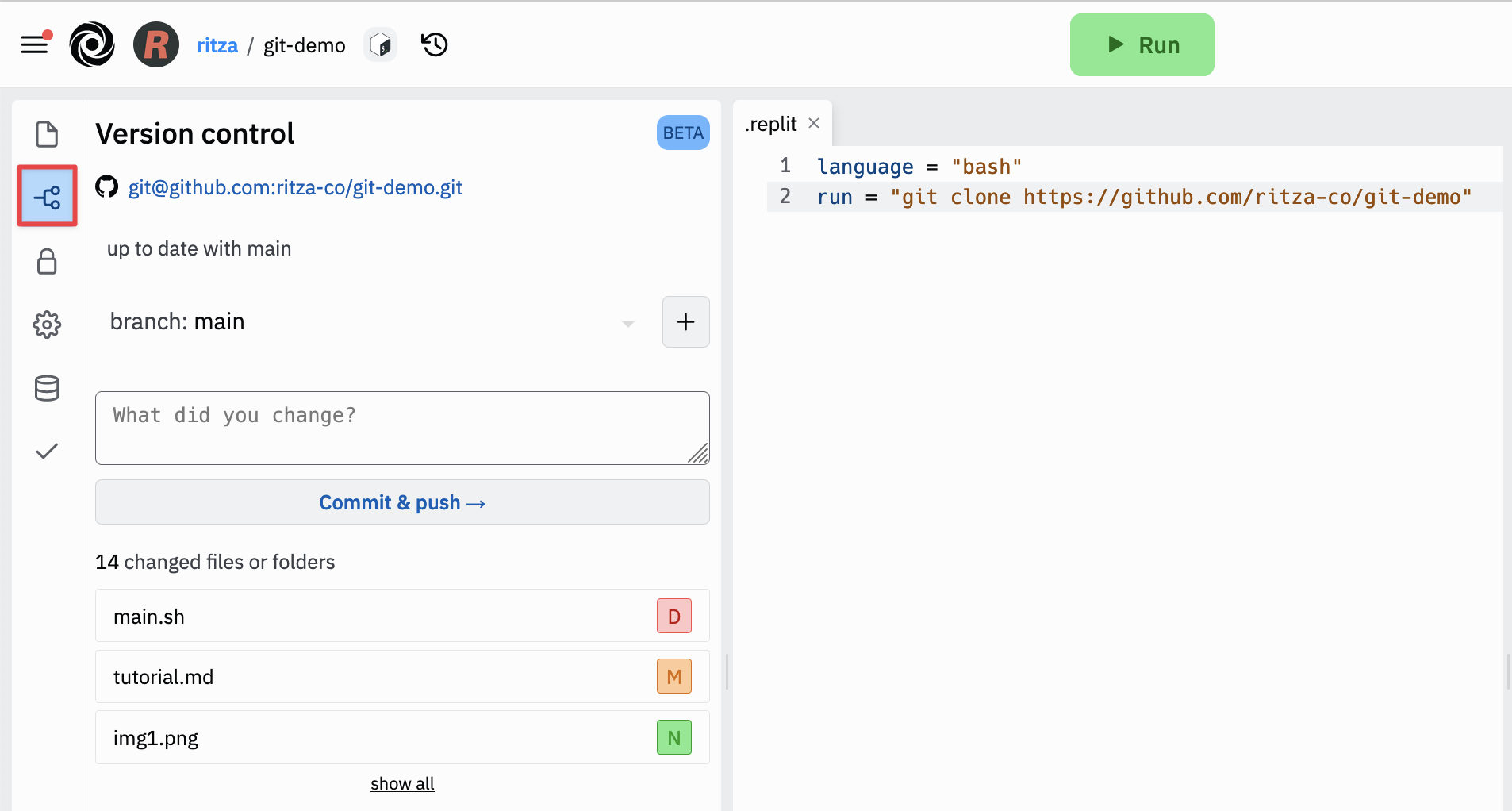 If you want to use a different Git hosting provider or run more advanced Git commands, you can use the shell that is built into the Replit IDE. From here you can run any Git commands you want, and everything will work exactly as it would when using Git from the command line of your local machine.

Cloning an existing repository from the shell​

To clone a repository, use git clone <url-to-your-repository>. The URL should start with https so that you don't need to configure an SSH client on your repl. If the repository is public, it will immediately be cloned into your Replit Workspace, and you'll see the new directory appear in your files bar.

In the example shown below, we run git clone https://github.com/ritza-co/git-demo.git and can see the new files appear in a subdirectory on the left called git-demo.

Once you've cloned a repository, you can make changes using the Replit IDE. Once you're happy with the changes, you can add new files, commit your changes, and push everything back up to your Git hosting provider (e.g. GitHub) by running a few commands.

Before running any of the below, make sure you're in the correct directory. For example, if you cloned your repository using git clone as described above, you'll first have to change into the sub-directory, e.g. cd git-demo in the example we are using.

If you are happy with all of your changes, you can add them all with the following command:

Once you've added the files, you can run git status again to see that all the changes are listed in green now, showing that they're tracked by Git. In the example below, we see that we changed one file (READEME.md) and removed another one (The git-demo subdirectory). We also added a new file called newfile.md which is shown under "untracked files".

After running git add ., all files and changes are tracked by Git, so they appear under "Changes to be committed". 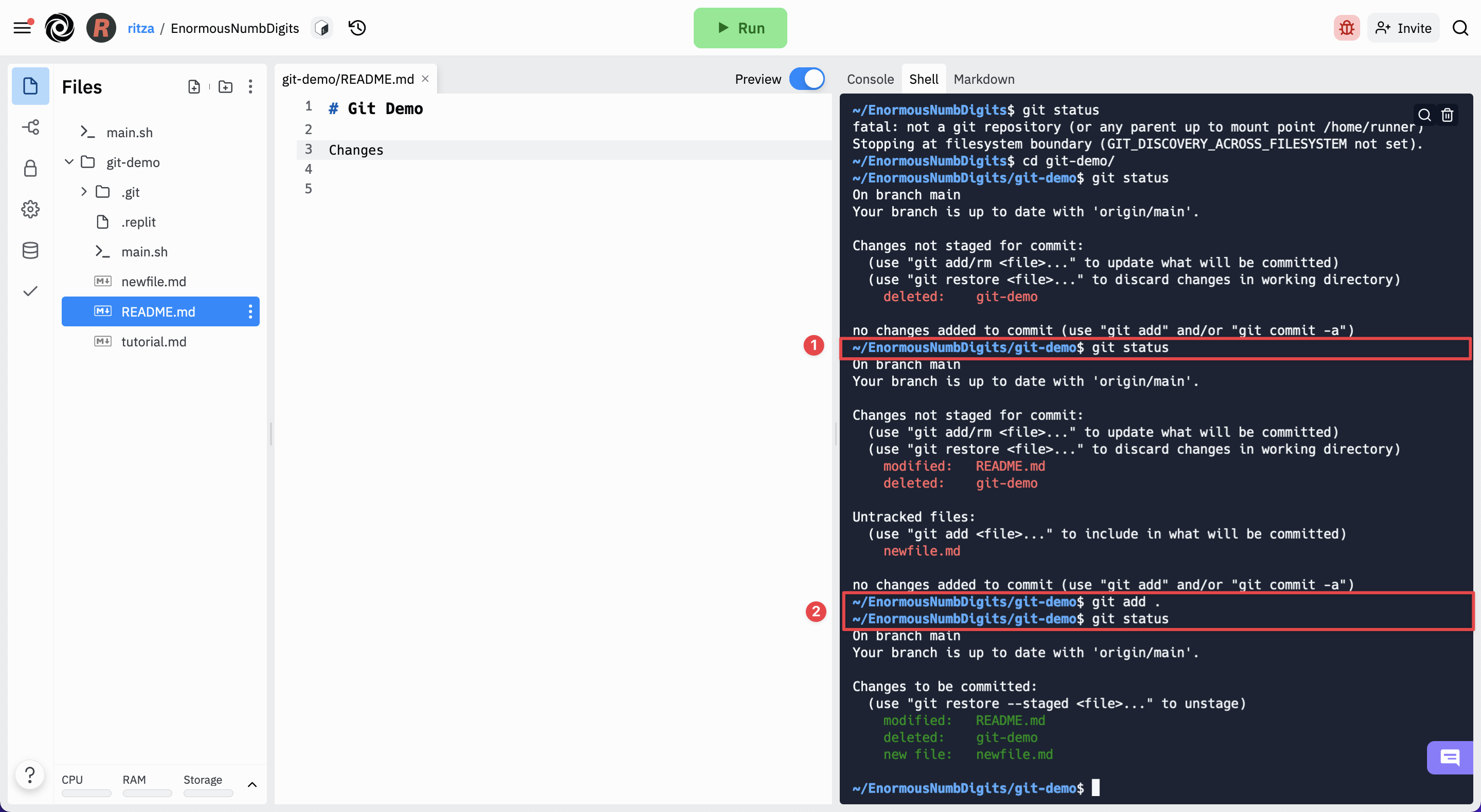 Now you can commit and push your changes as follows. You may have to change the branch name main to whatever your branch is called, e.g. git push origin master or git push origin develop are some common names.

You'll be prompted for your username and password, whether or not the repository is public. Remember to use your GitHub access token instead of your password if you are using GitHub.

If everything works out, you should see a "Writing Objects..." message, followed by "done", as shown below.

There's always a tradeoff between convenience and security. If you are dealing with sensitive code or information, it's best to store your password or access token in a password manager, and paste it in each time you push changes.

If you prefer, you can store your credentials as part of the remote Git URL as environment variables, using Replit secrets. This means you won't have to type your username and password each time, but it also means that anyone with access to your repl will be able to find your password or token.

Under the secrets tab in the sidebar, add a new secret. Put GIT_URL as the key and the URL to your Git repository with your credentials as the value. For example, on GitHub you use the format https://<username>:<github-access-token>@github.com/<user-or-organization>/<repository>. Click 'Add Secret'. You may have to restart your shell before this secret becomes available, which you can do by typing exit in the shell.

Now you can use git push $GIT_URL to push up to your remote Git host without needing to type in your credentials.

For more advanced use of Git, including branching, rebasing, cherry-picking, and more, see our Git commands reference guide.