Three.js is a JavaScript library for rendering 3D worlds in web browsers. With three.js you can make a website using 3D elements and advanced animation, or even complex 3D games in JavaScript. To get a feeling for the kind of renders three.js is capable of, have a look at their examples page.

Using three.js with Replit requires a little extra setup, but your site will be online immediately, making it easy to share with your friends.

Creating a new project in Replit​

Head over to Replit and create a new repl. Choose HTML, CSS, JS as your project type. Give this repl a name, like "3D rendering". 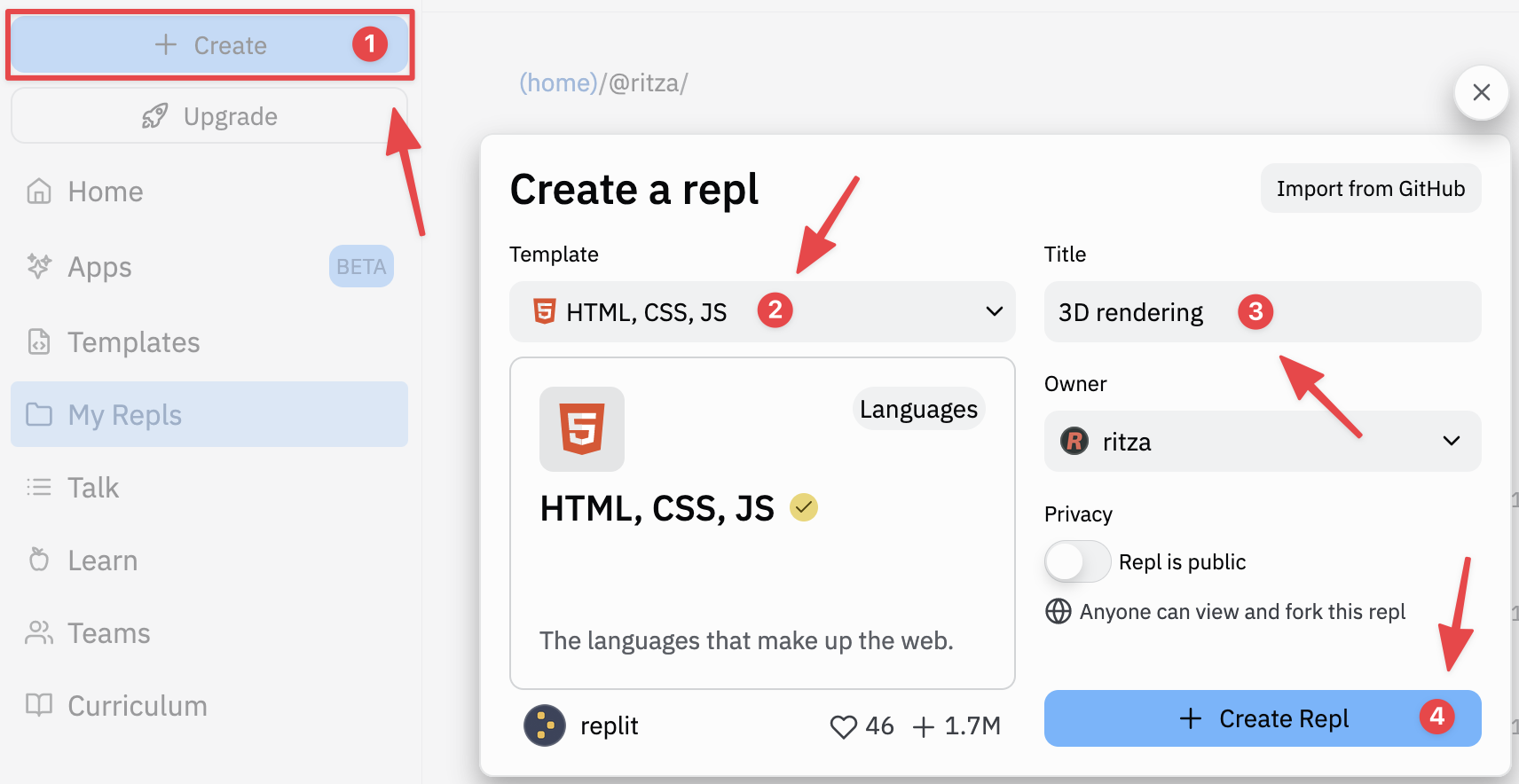 Importing three.js to the project​

Open the script.js file in your repl. We'll import three.js by referencing it from a content distribution network (CDN). There are other ways of using three.js in a project, but this one will get us up and running the quickest.

Add the following line to the script file to import three.js from the Skypack CDN:

You'll notice that we're using the import keyword. This is a way of importing a new JavaScript module package. To make this work, we need to change the default script tag in the index.html file to the following:

Notice we added the type=module attribute to the script tag, which allows us to use module features in our script.

Now we are ready to use three.js in our project.

To start, we'll add some basic built-in 3D shapes to a scene. The main steps are:

That's quite a few steps, so let's start by creating a renderer. Add the following lines to the script.js file:

This sets up a new WebGL renderer. WebGL is a browser technology that gives web developers access to the graphics cards in computers. The setSize method sets the size of the renderer output to the size of the browser window by using the width and height values from the window object. This way our scene will take up the entire browser window.

Next we'll create a new Scene container. Add the following line to the script.js file:

Its' time to create some 3D objects. We'll start with a cube. To create a cube, we'll need to create a Geometry object. Add the following line to the script.js file:

This gives us the geometry of a cube. The BoxGeometry constructor takes three arguments: the width, height, and depth of the cube. Three.js has more built-in geometries, so let's add another shape to the scene. This time we'll add a torus, or donut shape. They always look cool in 3D:

We've got the geometry, or points, of the 3D objects. Now we need to create a material to cover them with. You can think of the material as the skin of the object. Add the following line to the script.js file:

The next step is combining the geometries and the material to make a mesh. Add the following lines to the script.js file:

These meshes are what we'll add to the scene. We'll add the cube first, then the torus.

A camera determines what we see rendered, depending on where it is placed and where it is aimed. Add the following line to the script.js file:

We've got all the pieces we need to start rendering the scene. Now we just need to tell the renderer to draw the scene. Add the following line to the script.js file:

Now try running the code, by pushing the Run button at the top of the Replit window. You should see your first scene, a green cube and torus: 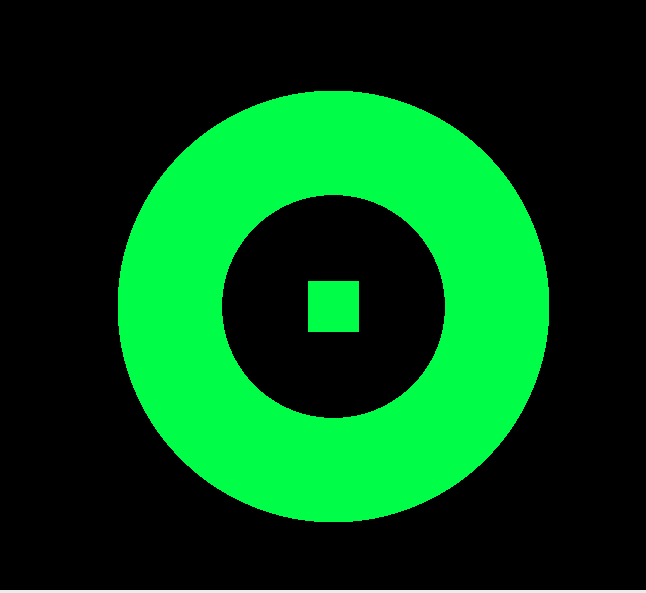 Our scene doesn't look very "3D" yet, but we'll get there soon.

Animating a scene or moving the camera can create more of a 3D effect. Let's add a little animation to our scene by rotating the torus and cube. In the script.js file, replace renderer.render(scene, camera); with the following lines:

This creates a new function, animate(), that will be called on every frame. We rotate the torus and cube by 0.01 radians around the objects' x and y axes using the rotation property of each mesh. This is a handy method that saves us from calculating the rotation ourselves.

After we rotate the objects, we call the renderer.render(scene, camera); method to draw the scene. This will cause the scene to be redrawn every frame, with the updated rotations.

To kick off the animation for the first time, we call the animate() function ourselves. Thereafter, it will keep itself running.

Press the "Run" button again and you should see the torus and cube rotating in the Replit window:

Try changing up the material color and see what happens. You can also define different materials for the torus and cube, to make them look different.

Adding a model to the scene​

We've created some basic 3D shapes programmatically. As you can imagine, building up a complex 3D world or character using this method would be very tedious. Fortunately, there are many 3D models available online, or perhaps you or a friend have played with making models in 3D animation applications like Blender. Three.js has a built-in loader to load these models into the scene.

To add the model loading functionality, we need to import it into our script. At the top of the script.js file, just below the existing import line, add the following:

This gives us the GLTFLoader class, which we'll use to load the model. "glTF" stands for Graphics Language Transmission Format, and is widely used as a way to import and export 3D models from various 3D applications. All we need to know is that we can import any model that is saved in this format into our three.js applications. If you search for "free GLTF 3D models" on the web, you'll find a lot of sites where creators upload their models. Many are free to use in your projects, and some you need to pay for. We'll look for some free ones to experiment with.

Let's use this model of soda cans to start. Download the model, choosing the glTF format. We've also included the model here, so you can download it easily.

Add the model to your repl by dragging the folder into the "Files" panel on the left.

We'll need to remove or comment out the previous code that drew the cube and torus. Remove the lines that create the cube and torus geometries, materials, and meshes, as well as the animation code. You should have only the following lines remaining:

We need to add a few extra steps when loading a model. First, we need to create a new GLTFLoader object. Add the following line to the script.js file, just below the scene variable line:

Now for the actual loading code. We'll use the load method of the loader. Add the following lines to the script.js file, below the code we've just added:

We supply the undefined value for the progress callback, as we don't need it for this example, although it is a nice touch in a production application to give feedback to the user.

This alone won't always make a model visible on the screen. This is because a model may have no lighting, or the material may not be self-illuminating, or the model may be too large or too small to be visible from our default camera angle. To account for these possibilities, we'll include some helper functions to add lighting, adjust the model's position, and set the camera's position and angle.

Let's start with adding some lighting. Add the following function to the script.js file:

This function will add a directional light with a white color to the scene, at a position slightly offset from the camera. We attach the light to the camera so that it is always shining at whatever the camera is looking at.

The second helper function adjusts the positions of the model and the camera. Add the following function to the script.js file:

We center the camera on the model, and then adjust the camera's position and angle to make sure the model is visible. We also point the camera to the center of the model using the lookAt method.

You'll notice that, along with calls to the new function, we added in an extra line scene.add(camera). This is because we added the light to the camera to follow it around. A light is part of the scene, so we add the camera with the light attached to our scene.

If you run the code, you'll see that the model is now visible in the scene. However, it's a side-on view and a bit far away. 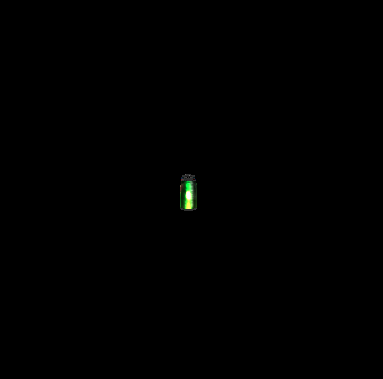 Adding controls to the scene​

To be able to see and inspect the model better, we can add some mouse controls to the scene so that we can zoom in or rotate the model. Three.js has a built-in OrbitControls class that we can use.

First, add the following import code to the top of the script.js file, along with the other import statements:

To initiate the orbit controls, we'll need to add the following code to the script.js file, after the renderer and camera have been created:

This creates a new controls object, and specifies what object it controls, the camera, and the DOM element the controls should listen to mouse inputs from. We also set the screenSpacePanning property to true, which allows us to pan the camera around the model.

The controls change the view of the model as we move around it, so we need to add a modified animate function to redraw the scene each frame. Add the following code to the script.js file:

Now replace the renderer.render(scene, camera); line in the loader.load callback function with the following call to the animate function to start it off;

Save and run the project. Now you can try using the mouse to rotate the model and zoom in and out.

Now that you know how to build a simple 3D scene using three.js, you might like to explore three.js and 3D rendering a little more. Head over to the three.js documentation to learn more about the tool and see other examples of what you can do with it. You can also download and try Blender to create your own 3D models.