In this lesson, you'll gain experience with using and manipulating files using Replit. In the previous lesson you saw how to add new files to a project, but there's a lot more you can do.

Files can be used for many different things. In programming, you'll primarily use them to store data or code. Instead of manually creating files and entering data, you can also use your programs to create files and automatically write data to these.

Replit also offers functionality to mass import or export files from or to the IDE; this is useful in cases when your program writes data to multiple files and you want to export all of these for use in another program.

Create a new Python repl and call it working-with-files. 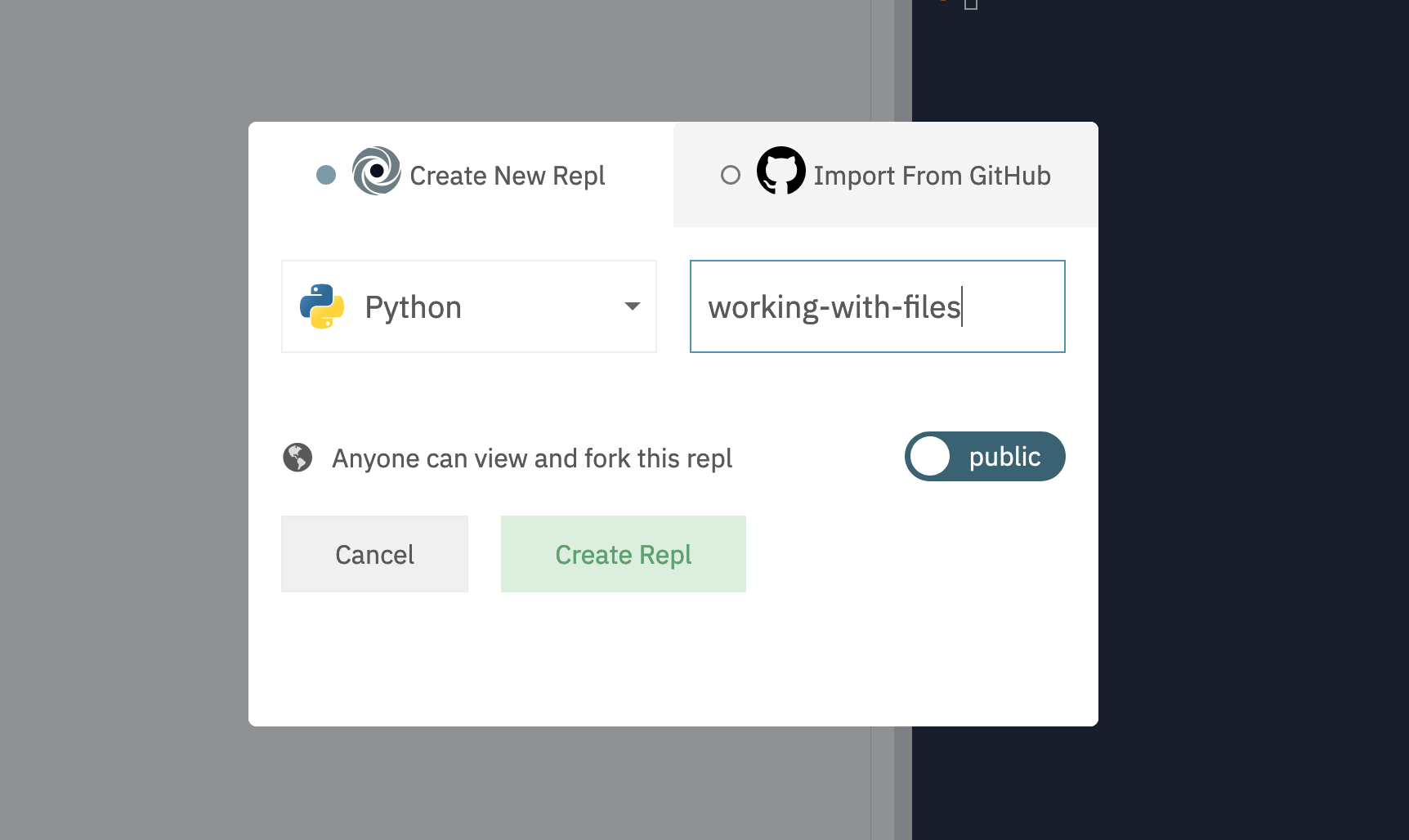 As before, you'll get a default repl project with a main.py file. We need a data file to practise reading data programmatically.

You should now have something similar to what you see below.

Go back to the main.py file and add the following code.

This opens the file programmatically, reads the data in the file into a variable called contents, closes the file, and prints the file contents to our output pane.

Press the Run button. If everything went well, you should see output as shown in the image below.

Instead of manually creating files, you can also use Python to do this. Add the following code to your main.py file.

Note the w argument that we pass into the open function now. This means that we want to open the file in "write" mode. Be careful: if the file already exists, Python will delete it and create a new one. There are many different 'modes' to work with files in different ways which you can read about in the Python documentation.

Run the code again and you should see a new file pop up in the files pane. If you click on the file, you'll find the data that the Python script wrote to it, as shown below.

Now that you can read from files and write to them, let's build a mini-project that records historical weather temperatures. Our program will

Creating a WeatherStack Account and getting an API key​

We'll get weather data from the WeatherStack API. You'll need to sign up at weatherstack.com and follow the instructions to get your own access key. Choose the "free tier" option which is limited to 1000 calls per month. 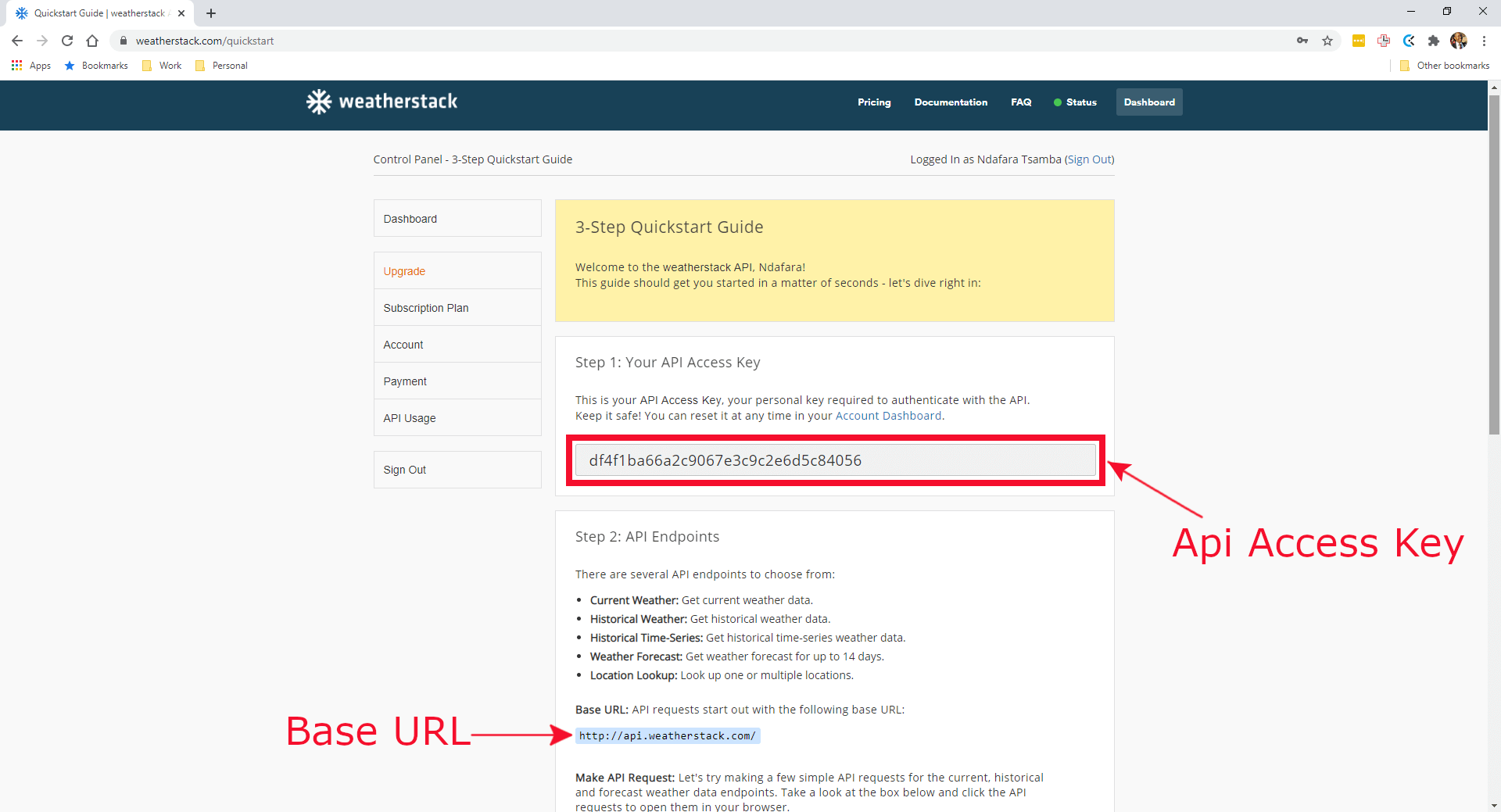 You should keep this key secret to stop other people using up all of your monthly calls.

You can continue to use the working-with-files project that you created earlier if you want to, but for the demonstration we'll create a new Python repl called weather report.

In the main.py file add the following code, but replace the string for API_KEY with your own one.

This code asks WeatherStack for the current temperature in London, gets the JSON version of this and prints it out. You should see something similar to what is shown below.

WeatherStack returns a lot of data, but we are mainly interested in

Add the following code below the existing code to extract these values into a format that's easier to read.

If you run the code again, you'll see a more human-friendly output, as shown below.

This is great for getting the current weather, but now we want to extend it a bit to record weather historically.

We'll create a file called cities.txt containing the list of cities we want to get weather data for. Our script will request the weather for each city, and save a new line with the weather and timestamp.

Add the cities.txt file, as in the image below (of course, you can change which cities you would like to get weather info for).

Now remove the code we currently have in main.py and replace it with the following.

This is similar to the code we had before, but now we

In our previous examples we explicitly closed files using f.close(). In this example, we instead open our files in a with block. This is a common idiom in Python and is usually how you will open files. You can read more about this in the files section of the Python docs.

If you run this code, you'll see it creates one file for each city.

If you open up one of the files, you'll see it contains the date and temperature that we fetched from WeatherStack.

If you run the script multiple times, each file will still only contain one line of data: that from the most recent run. This is because when we open a file with in "write" mode ("w"), it overwrites it with the new data. Because we want to create historical weather logs, we need to change the second last line to use "append" mode instead ("a").

and run the script again. If you open one of the city files again, you'll see it has a new line instead of the old data being overwritten. Newer data is appended to the end of the file. WeatherStack only updates its data every 5 minutes or so, so you might see exact duplicate lines if you run the script multiple times in quick succession.

If you run this script every day for a few months, you'll have a nice data set that could be useful in other contexts too. If you want to download all of the data from Replit, you can use the Download as zip functionality to export all of the files in a repl (including the code and data files).

Once you've downloaded the .zip file you can extract it in your local file system and find all of the data files which can now be opened with other programs as required.

From the same menu, you can also choose upload file or upload folder to import files into your repl. For example, if you cleaned the files using external software and then wanted your repl to start appending new data to the cleaned versions, you could re-import them.

Replit will warn you about overwriting your existing files if you haven't changed the names.

That's it for our weather reporting project. You learned how to work with files in Python and Replit, including different modes (read, write, or append) in which files can be opened.

You also worked with an external library, requests, for fetching data over the internet. This module is not actually part of Python, and in the next article you'll learn more about how to manage external modules or dependencies.